Since my eureka moment with blockchain’s incentive mechanism, I have been postulating a system where human participates en masse in the improvement of AI.

My definition of AI is somewhat similar to that proposed by Julien Togelius here - all of civilization. My angle is that the collective capability of a civilization depends heavily on both its technology (which I define as the massive scaling, preservation, and actualization of human knowledge) and the incentive mechanism of its people. The technological paradigm at the moment is data-driven machine learning techniques running on semiconductor-based computing systems, with deep learning being the fastest growing branch. The success of techniques rely on the combination of faster computing systems, algorithmic improvement, and the availability and granularity (both spatial and temporal) of training data. On the front of computing system acceleration, I believe the industry has gradually come to the realization that Lightmatter, with its photonic computing systems, is the most promising force to overcome Dennard scaling and revive Moore’s Law. On the front of algorithmic improvement, I tend to agree with OpenAI’s thesis that massive models comprising simple algorithmic primitives is the way to go, which is reinforced by recent publications (example) that MLP is sufficiently powerful. This brings us to the last front - data. Many startups have sprung up trying to provide high-quality labeled data. Yet I believe, on a fundamental level, if we are able to allow anyone to contribute high-quality data for specific AI training purposes, the advancement of ML systems will speed up dramatically. This “scheme” that allows anyone to be able to willingly contribute to AI training touches upon the second component of civilization in my definition - the incentive mechanism of its people. This is where blockchain could come into play.

Simply, the primary incentive for human to do almost anything in the contemporary civilization is the attainment of financial capital. Therefore, my postulation can be simplified into imagining a system where human participants contribute to the advancement of AI in exchange for financial capital. We have plenty of examples already - every AI scientist employed to conduct AI research is one, the human labeler hired to label data for AI training is another. Yet, these examples rely on traditional employment contracts. Are there examples that leverage the incentive mechanism unique to blockchain systems? Yes: numer.ai. Numerai trades with the US stock market and profit-shares with anyone in its native currency, NMR, in return for quality prediction of stock prices based on quality financial data (encrypted) procured and provided by Numerai itself. In essence, Numerai is an AI system that directly makes money in the market from the contribution of its human participants, and it in turn shares that money with the human participants in specific ways (staking & burning as well as reputation) that sustain the positive feedback loop of its growth.

So that clearly is one great example, but the human participants of Numerai are restricted to data scientists, which in total account for less than 3 million people around the world (source), or 0.038% of human population. Is there a way to allow 0.1%, 1%, or even 10% of the human population to directly participate in the advancement of AI? I believe video games is the solution - there are 3.1 billion video game consumers worldwide by mid-2020 (source), or a shocking 39% of human population. Moreoever, I believe the creation of metaverse will rely on the realization of this system, not to mention other aspects of our civilization (fundamental scientific research, space travel etc) which could also benefit from this system.

Video games. The most engaging medium known to human. A progammable medium. A network-distributed medium. A medium where AI research is abundant. How about: make a game where player contributes to the advancement of AI by playing the game and gets paid by doing so effectively? But how does the “cash” flow? For Numerai, the advancement of their trading AI leads to more trading profits, which leads to more income for the human participants; for video games, the advancement of game AI does not directly lead to better game profitability. One solution could be: make a game where its entertainment value, and thus profitability, lies uniquely with the capacity of the game AI (here the AI refers not narrowly to the AI controlling NPCs, but the AI systems that enable the game to work by generating game contents for example), and where the game AI improves by collecting high-quality gameplay data contributed by gamers. The game publisher/developer shares their profits with the gamers pro rata to the quality of gameplay data they contribute. This sounds nice, albiet abstract. And this does not utilize any of the unique incentive mechanism offered in the blockchain space.

Recall “play-to-earn”. The MAO DAO is one such organization where gamers of blockchain games earn NFT-based game assets for the organization and get monetary rewards in return. An example of one such blockchain game is Axie Infinity, where everything from the land plots to the potions are NFTs, which are tradeable on open markets. So MAO DAO is pioneering the vision where regaular gamers, as oppposed to professional esport gamers, play game for a living, yet to my knowledge the game mechanics of Axie Infinity does not involve AI systems. NFT, however, provides inspirations. 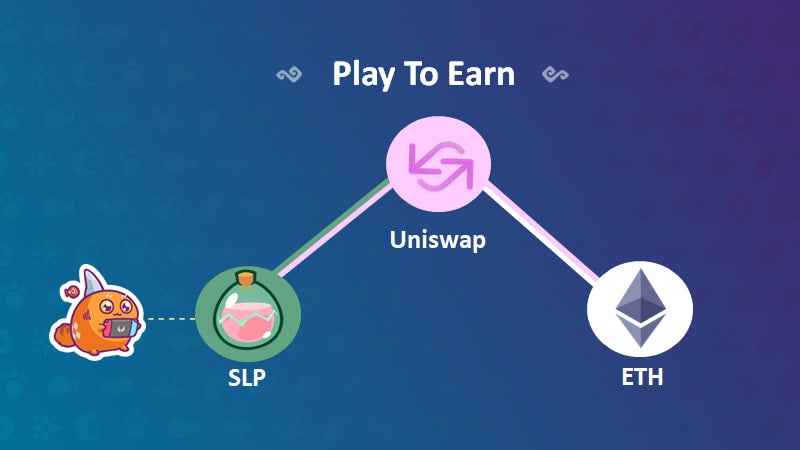 The idea is thus:

The assumption is that, with the game gaining popularity, the gaming-montage NFTs will worth more, meaning the top-performing gamers - the gamers who outcompetes the NPC through suprising gameplay strategies, making their gameplay important for the AI to learn from - can sell the NFTs for income.

The idea above without doubt uses only the very narrow possibility of NFT - its ability to tokenize multimedia and its financial value protected by provable scarcity. Furthremore, it is questionable if the gaming-montage NFTs from top-performing gamers will be the best-selling NFTs: a gamer playing a game supremely well often has much less popularity than a streamer who plays the same game with average skills but narrate in hilarious or memorable ways, or even a streamer who is simply a famous person in real life whose game skill is irrelevant. Still, I think it is conceptually very interesting and can serve as a foundation for further brainstorming.