I want to be able to feel my extra virtual limb proprioceptively as I flex it in the virtual space, say inside the screen of the laptop. I can hold on to the icons of files, folders, hyperlinks, buttons, and I can feel their tactile structure. I can select them by squeezing them. One day I want to be able to do this.

There is so much dexterity, to the point of elegance, in human’s ability to control and coordinate muscle movement. Imagine a chef’s hands. Imagine a pianist’s fingers. Imagine a dancer’s arms, legs and torso. But all we have in direct control is our body, our own locomotion, while machines can manipulate atoms and bits alike in all dimensions. A higher level of human-machine symbiosis will bring elegance into the connotation of the word robot, something that has hitherto been depicted in sci-fi films.

To achieve this we need to push our human-machine symbiosis to a much higher level. Considering the bi-directionality of the human-machine bridge (M->H and H->M):

The focus on human’s outbound bandwidth leads to Neuralink. Here I attempt to walk through the paper published by the Neuralink team in July 2019 in order to grasp where we are now in this quest. The paper mentioned on page 10 that “we designed the Neuralink ASIC to be capable of electrical stimulation on every channel, although we have not demonstrated these capabilities here.” So I will focus on achieving the increase in outbound bandwidth only.

The overarching goal here is to transmit spiking information at high bandwidth out from the human brain without tethering human to any stationary equipment.

1. An array of flexible electrode threads

Most BMI we use now is based on arrays of stiff needles made of metal, where one needle is one electrode. Its inability to stretch and bend hurts its biocompatibility and longevity. Above all, the mere image of sticking an array of needles into the brain would dissuade most healthy people.

An alternative approach is to use multi-electrode polymer probes that are thin and flexible. Furthermore, each thread could be inserted into the brain individually, as opposed to the rigid form factor of the metal needle array. Its drawback: not stiff enough to penetrate meninges and insert into the brain tissue. The insertion process, via stiffener and injection, has been slow. At surgery it’s also crucial to not penetrate surface vasculature of the brain, because breaking the blood-brain barrier triggers inflammatory response. This naturally calls for a surgery robot, or more generally a production line to allow for high precision and high throughput thread insertion. I will cover Neuralink’s neurosurgical robot in the next section.

The above photos show 2 of the 20+ different thread-electrode configurations the Nueralink team experimented with. Photo A shows the “linear edge” probes, while photo B shows the “tree” probes. The suction cup-like endpoints are the gold electrodes. The probe is a long polyimide thread enclosing a thin-film gold trace serving as wire. On the left side of the photos you can see loops at the end of the thread. Those loops (16x50 um^2 each) are for needle threading by the surgical robot. The right side of the threads are connected to the sensor ASIC.

Photo C zooms in on the electrodes. They are quite small, meaning their impedance could be huge. To increase its charge-carrying capacity, the surface of the electrode undergoes surface modification with electrically conductive polymer. PEDOT:PSS promises lower impedance but its biocompatibility is less well established. 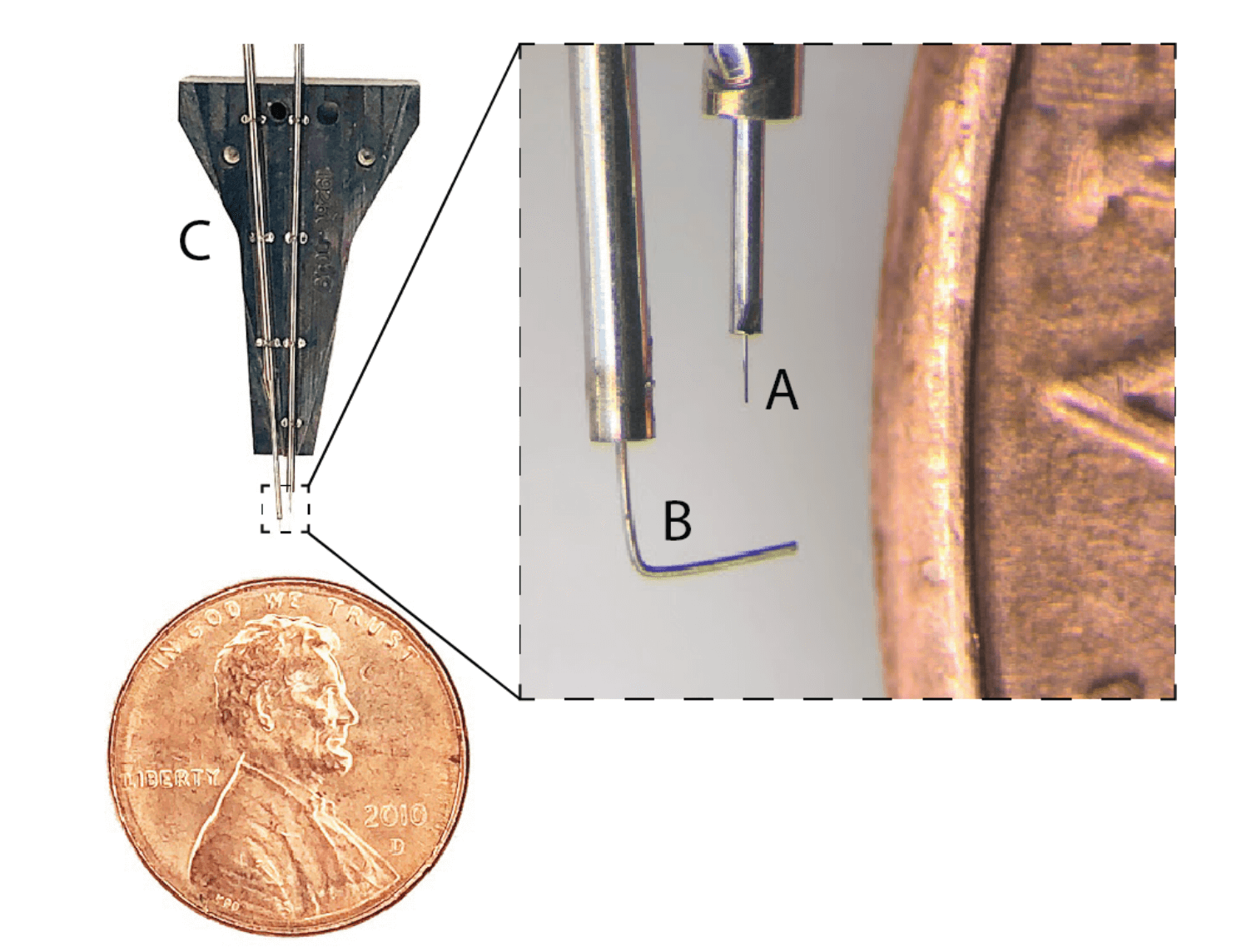 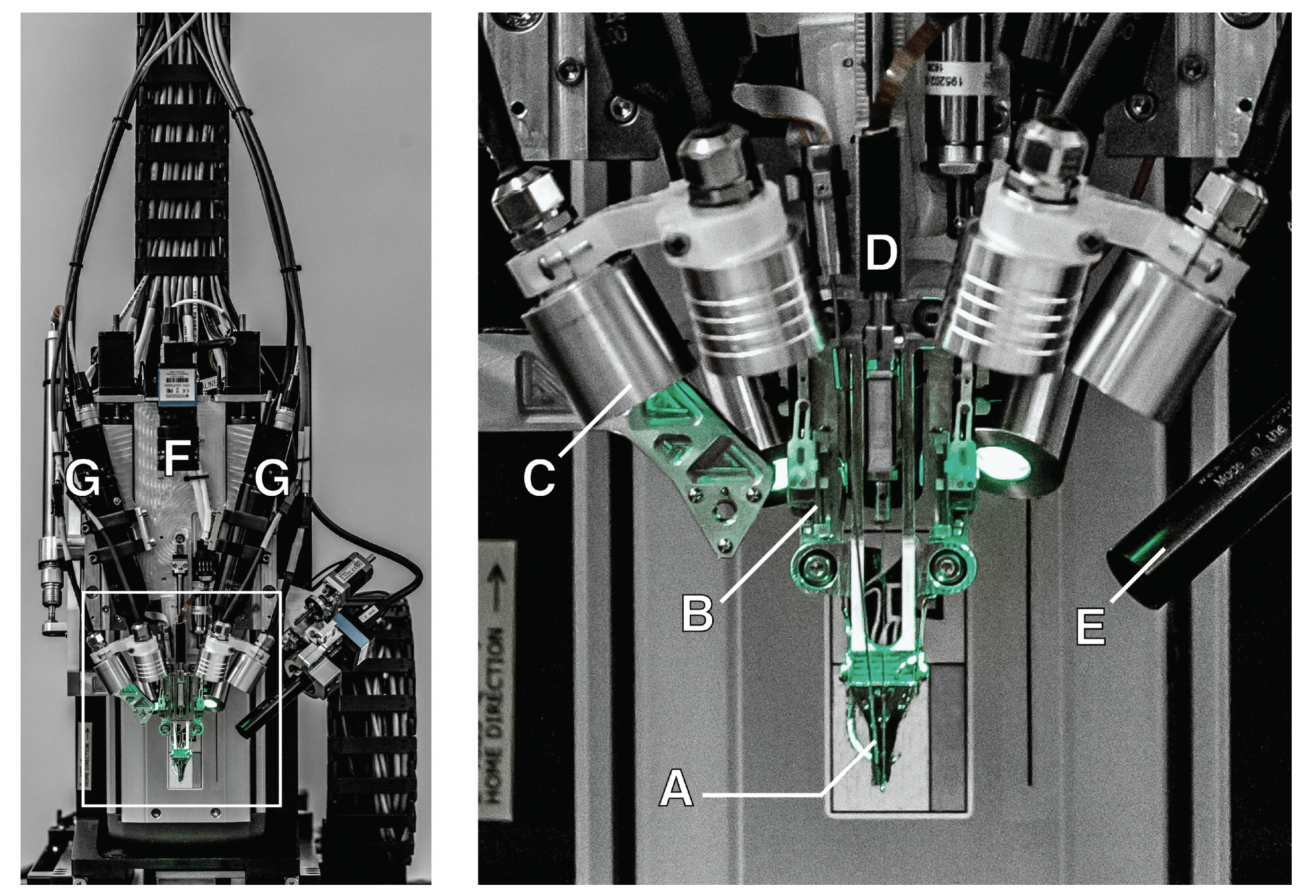 The above photo shows the rest of the neurosurgical robot.

Additional software helps with optimal routing of NPC’s trips between threads and their insertion locations to minimize tangling and strain on the threads. 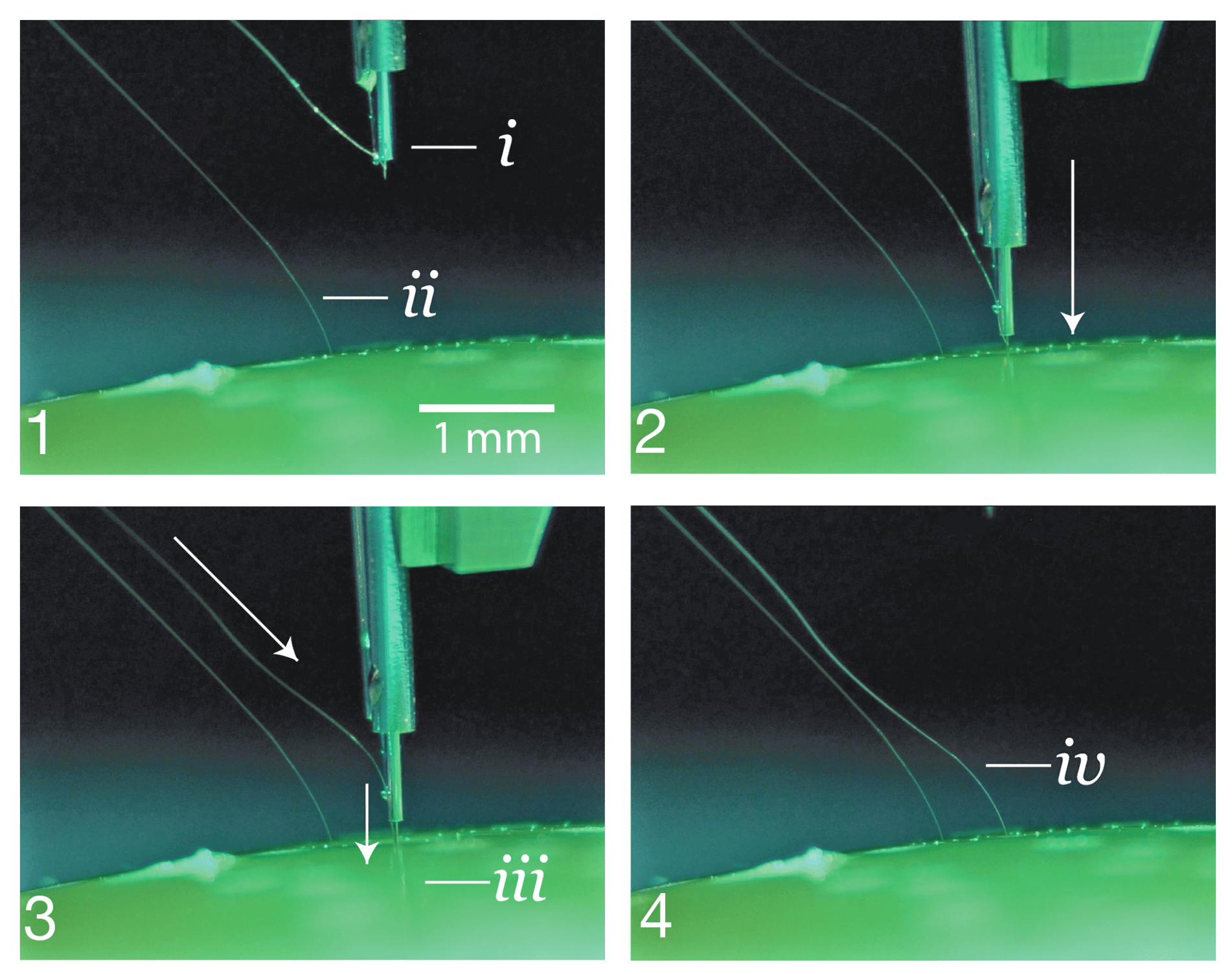 The photos above shows how NPC approaches the agarose brain tissue proxy (bottom of the photos), touches down on the tissue surface, penetrates the tissue and advances the needle to the desired depth, retracts and leaves the thread behind in the tissue.

3. An ASIC for amplification and A/D conversion

Routing all 96 threads of an array out of the skull without any signal processing would render those signals useless, given the SNR of the signal. Cable spec and connector spec would be prohibitive.

Which means, we need to amplify and filter the signals, digitize the signals and stream them out of the skull. 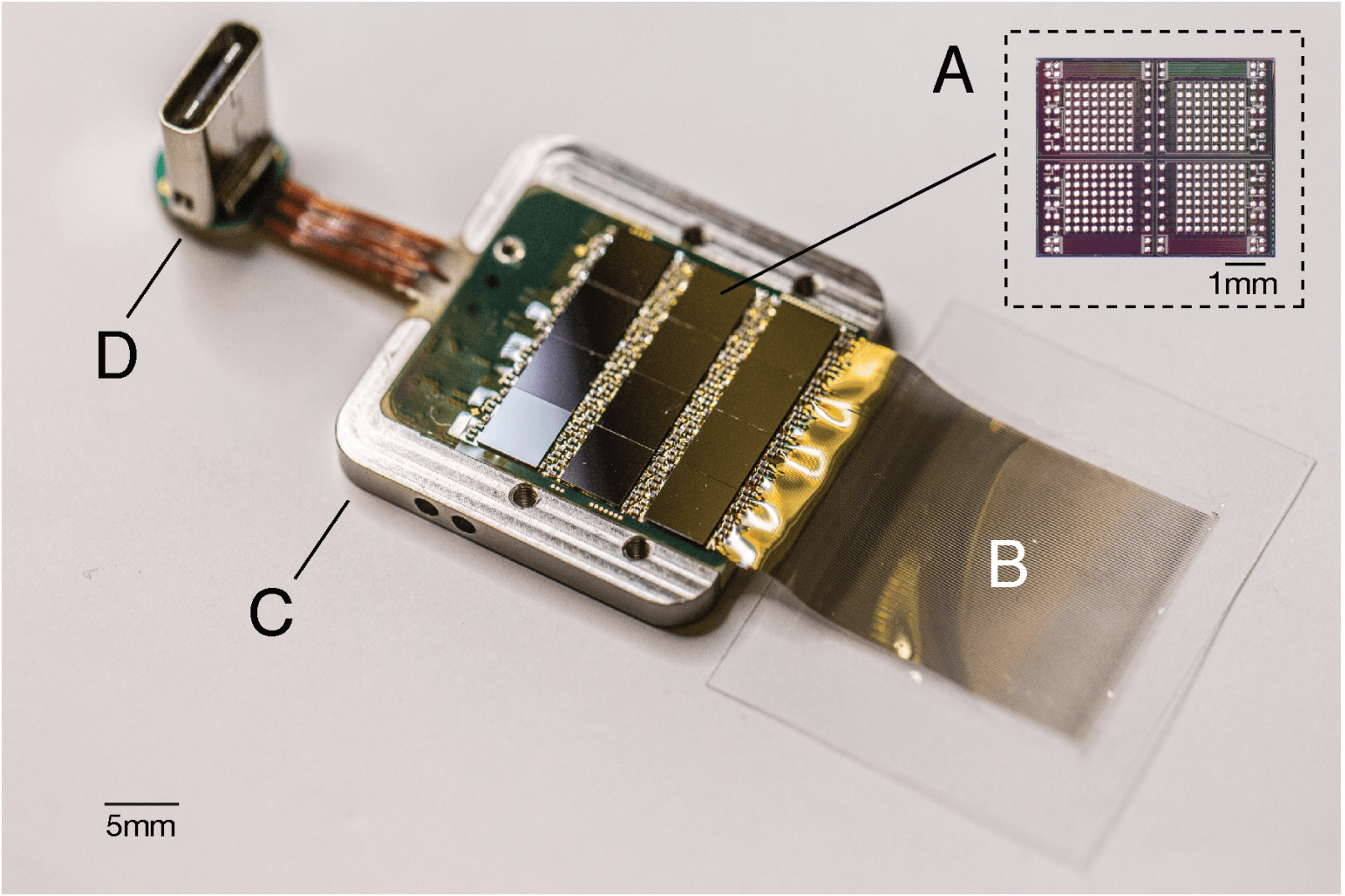 Neuralink built an ASIC consists of:

The gain and filter parameters of the amplifiers can be tuned programmatically to cancel out process variations and electrophysiological environment idiosyncrasies.

Each amplifier consumes ~5.2 uW, and every ASIC consumes ~6 mW. 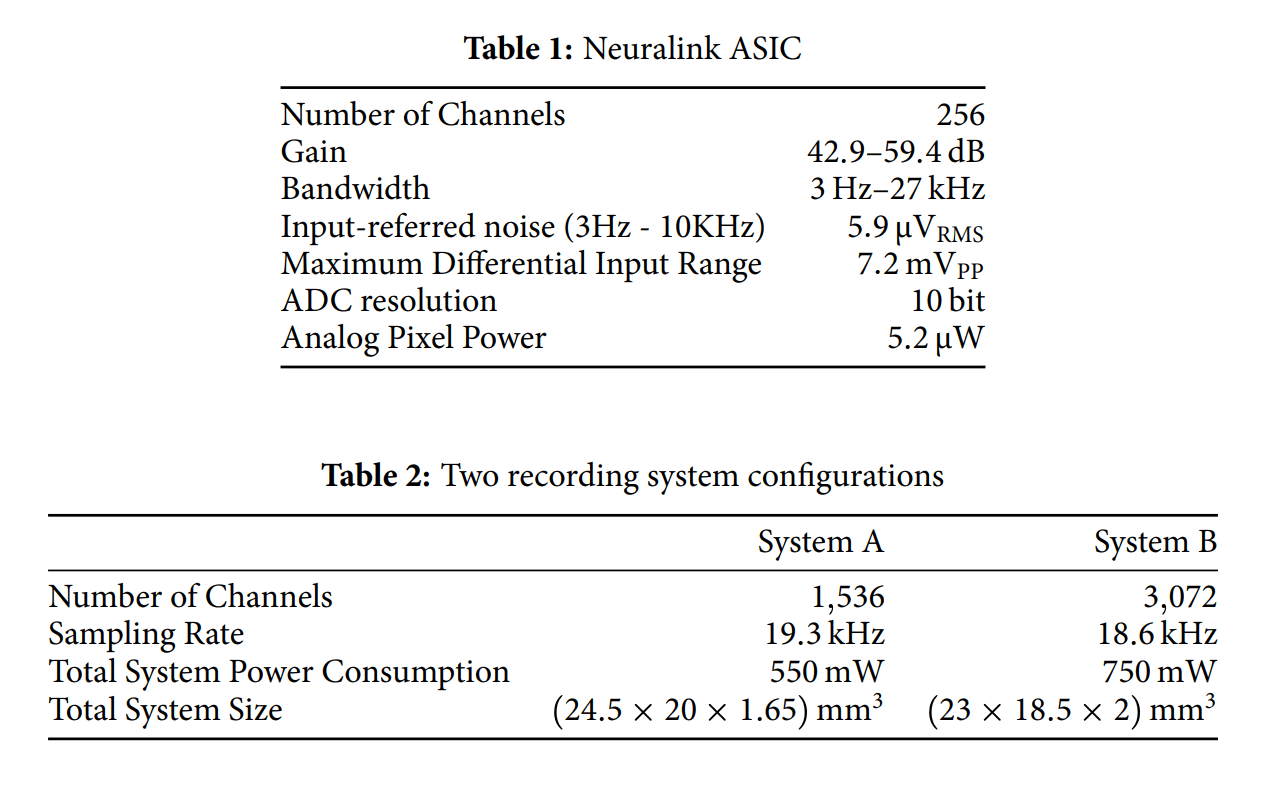 As the above shows, 2 system specs were implemented: System A and System B. System B maximizes electrode/channel density. System A has less electrodes/channels, but System B can be manufactured 5 times faster than System A and with better yield.

According to Neuralink, it is conceivable to plug a ethernet base station into the USB-C connector, allowing for real-time high-bandwidth neural data streaming.

Both System A and System B were tested in male Long-Evans rats. 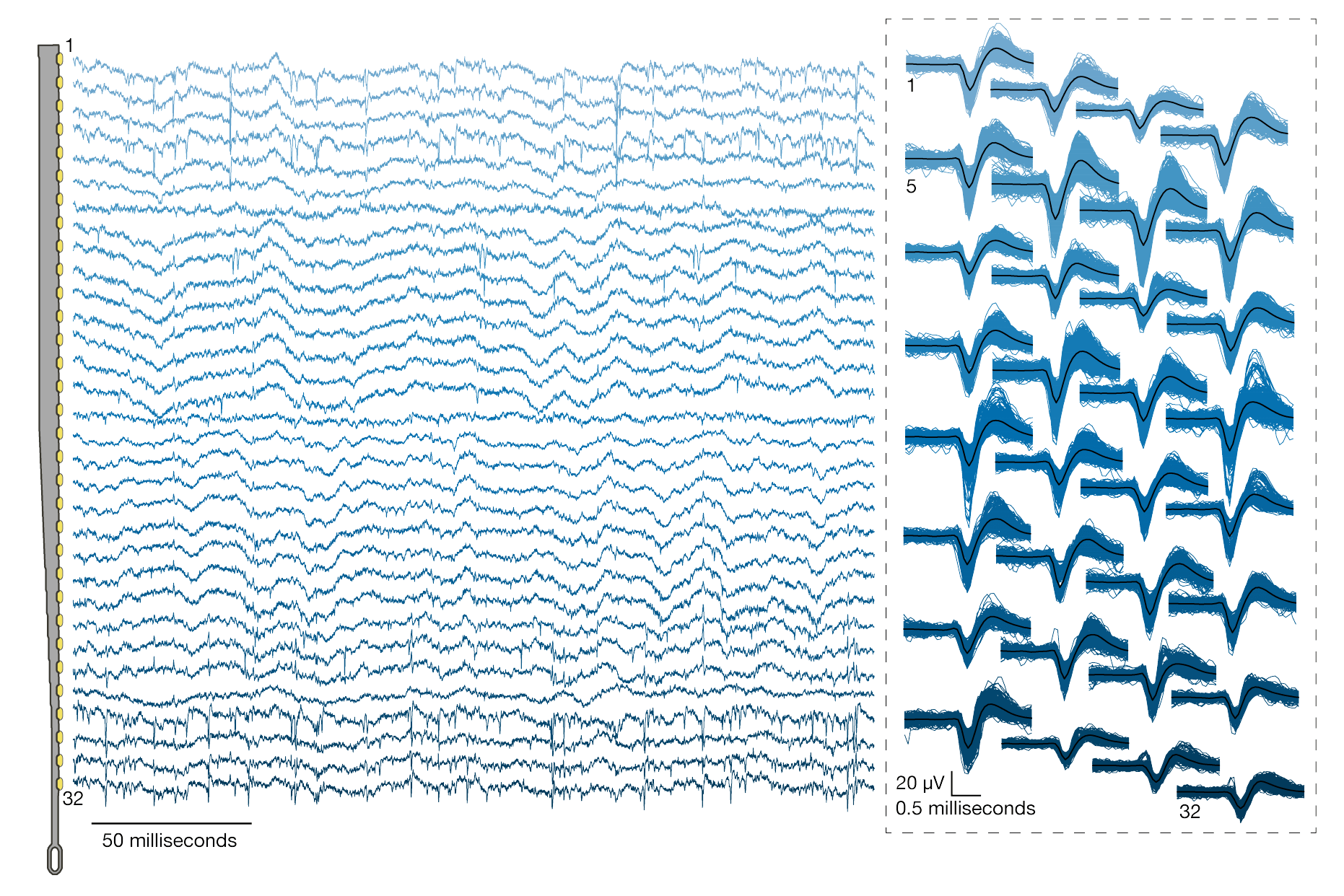 A threshold of >0.35 Hz was set to quantify the number of electrodes that recorded spiking units. No spike-sorting was performed. The above chart was from System A, where:

Neuralink explained that this system serves as a research platform, so wired connection was used for maximizing data streaming. For human clinical use, the device will feature: 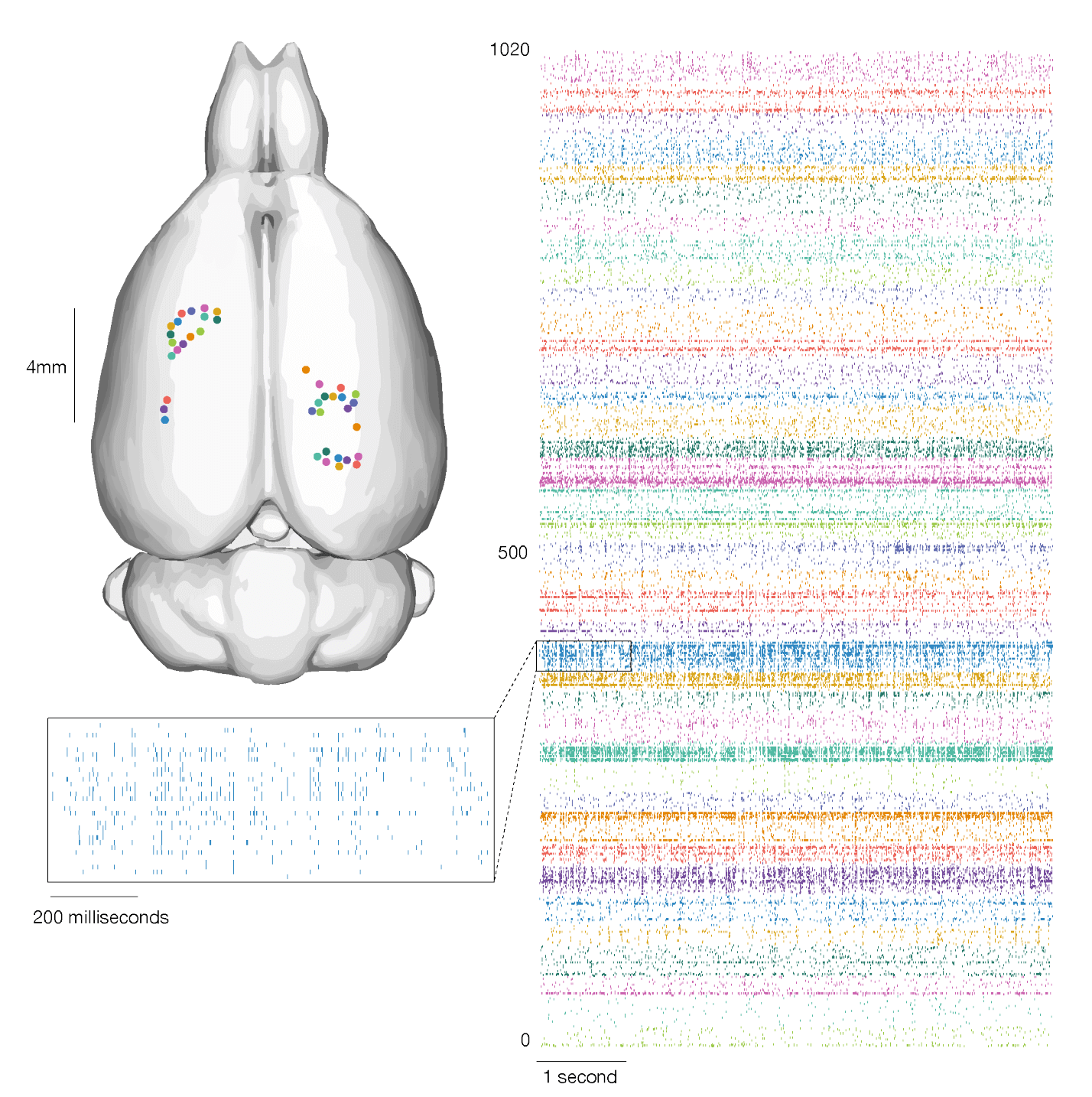 The above chart shows neural activity recorded across multiple brain regions and cortical layers and plotted as rasters of spikes.

It is plausible to imagine that a patient with spinal cord injury could dexterously control a digital mouse and keyboard. When combined with rapidly improving spinal stimulation techniques, in the future this approach could conceivably restore motor function. High-bandwidth neural interfaces should enable a variety of novel therapeutic possibilities.